The physical world is, for the most part, disorganized, messy, and ambiguous. One of the aims in science and technology is to try and bring some order to this chaos so that it can be systematically studied, or even consistently named. Sometimes out of such efforts spring deeper understandings of the Nature of the Universe, as when Dmitri Mendeleev published his Periodic Table of the Elements in 1869. Sometimes the chief value is an unambiguous and agreed-upon system of terminology, like the Binomial Nomenclature used by the International Code of Zoological Nomenclature, overseen by the International Commission of Zoological Nomenclature (ICZN), or the method used for naming molecules maintained by the International Union of Pore and Applied Chemistry (IUPAC). There are so many of these systems in use that you might think that everything has been neatly named and pigeonholed, but that’s not the case. The above examples are the result of international meetings and conventions, and required effort to organize. Not all things have been lucky enough to get that sort of attention. I was involved in an attempt over thirty-five years ago to bring consistency to the naming of point defects in crystals. The same defect might be called an F2– center, or an M – center, an M’ center or an F2’ center, depending upon the tradition the physicist was working within. The effort was not a success, and there is today a happy lack of consistency in the terminology of the field.

If there is insufficient interest, or there is no widespread commitment to a particular nomenclature, identical terms with different lineages might persist that mean different things to different users, with no governing body standing by to make certain that everyone plays by the same rules. This is the current situation when it comes to the various kinds of Pulsed Light, particularly that from xenon flashtubes of the type manufactured by XENON Corporation.

The lamps manufactured by XENON Corporation produce a very bright light output that overs a full spectral range, from deep ultraviolet (deep UV–less than 200 nm) to Near Infrared (NIR–more than 1000 nm). We call it “Pulsed Light”. There are many other terms being used, sometimes properly and sometimes not, and it’s important to understand the distinctions. 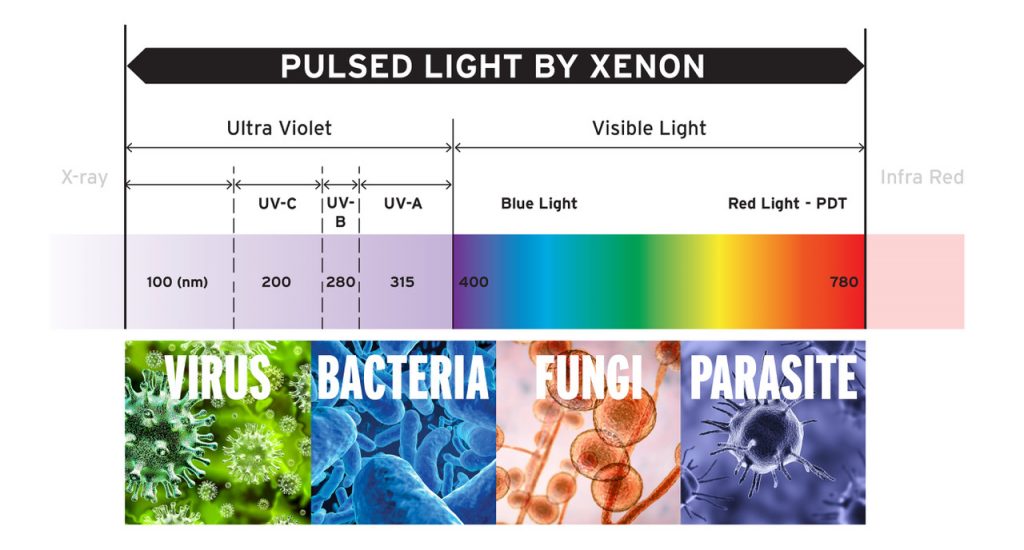 Intense Pulsed Light (IPL)
“Intense Pulsed Light” would seem to apply to our lamps, but this terminology has been used since about 1997 to refer to a particular type of output widely used for treating skin conditions. Typically, IPL omits shorter wavelengths, ranging from about 500 nm to 1200 nm, to avoid damaging the skin. The terminology is well established (there is even a Wikipedia page devoted to Intense Pulsed Light). Even though the output from xenon flashlamps is certainly “intense” we avoid use of the term IPL to avoid confusion with its lower energy cousin. Other variants used to describe dermatological applications include High Energy Pulsed Light (HEPL) and High Intensity Pulsed Light (HIPL), which are also sometimes used to describe sintering applications.

Pulsed Ultraviolet Light (PUV)
The term Pulsed Ultraviolet Light (PUV) is used to describe deep ultraviolet light including the DNA absorption band at 260 nm that is useful for germicidal and sterilization applications.  XENON Corporation flashlamps certainly produce such deep UV light, but also produce a great deal of visible and near infrared light which is useful in other applications (such as solar cell testing and the enhancement of foods). So, though PUV is accurate for some applications, it does not accurately convey the full spectrum of Pulsed Light by XENON.

Pulsed Xenon Ultraviolet Light (PXUV)
The term Pulsed Xenon Ultraviolet Light (PXUV) describes light generated by xenon flashlamps used for sterilization applications. Again, it applies to most lamps manufactured by XENON Corporation, but is used in reference to the sterilization capabilities of our lamps. As with PUV, it does not tell the full story as Pulsed Light by XENON emits a much broader range of wavelengths than simply the ultraviolet.

It’s important to note that all of these terms apply to gas discharge tubes, and have been used in that fashion since before 1970. The term always indicates a very bright, broadband output produced by pulsed electrical excitation of a xenon gas mixture enclosed in a tube. In recent years other light sources have been developed, the terminology of which might be confused with the above gas discharge terms.

Light Emitting Diodes (LEDs)
Output from Light Emitting Diodes (LEDs) can be run for brief periods of time, and this might be considered “pulsed”. As time goes by, the available range of output wavelengths from LEDs has edged further into the ultraviolet. Nevertheless, none of the above terms, particularly “Pulsed Light” and “Pulsed Ultraviolet light”, is used to refer to light from LEDs. It’s important to observe that light from LEDs is not broadband in its spectra, is not as short in its duration, and that even the most intense of LED light does not approach the intensity of pulsed gas discharge output. Even LEDs that incorporate fluorescent materials to extend the width of the output spectrum are spectrally much narrower than xenon flashlamps.

Pulsed Lasers
The output of a laser might consist of a beam of light that is always  present, at least while the power is on. Such a laser is called a Continuous Wave or “cw” laser. Or it might consist of a short burst of light, in which case the output is called a Pulsed Laser. The output of lasers is highly directional and concentrated in a small area. There are some situations in which this is desirable, but for irradiation of a large area for germicidal purposes or for sintering a large target or exposing an area covered with ultraviolet-cure ink, paint, or adhesive a broad-area source such as a flashlamp is is indicated.

Why it matters.
XENON’s Pulsed Light systems and lamps generate the highest energy, with less heat than any available technology. Its ability to generate the full spectrum of light means that the number of applications are seemingly endless, and continue to grow. And it’s a matter of clarity. The Food and Drug Administration’s Title 21 gives guidelines for the use of light irradiation in the production, processing, and handling of food. Section 179.41 talks about “Pulsed Light for the Treatment of Food”, and explicitly states that such sources are xenon flashlamps emitting light over the range 200 to 1000 nm. By this definition, many of the terms listed above do not apply, and nor do other technologies that are mentioned, such as  “pulsed” light emissions from LEDs or lasers.

Pulsed Light: What it is and What it isn’t was last modified: September 1st, 2020 by Stephen R. Wilk