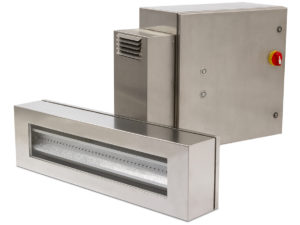 The food industry continues to experience food safety recalls resulting from pathogens on foods that can make consumers sick. Incidents persist despite efforts to improve the processes and procedures used to decontaminate foods and food contact surfaces. One known source of contamination is the food conveyor and XENON believes it has the technology to help.

The XENON Z-2000 Conveyor Decontamination System provides food processors with the ability to supplement existing procedures with the most innovative, effective decontamination system in the industry. The Z-2000 exposes conveyor belts to rapid pulses of high-energy UV light, destroying microorganisms before they can grow and contaminate food products. The system can operate during production to continuously decontaminate food conveyors as an integral piece of the “hurdle concept” – whereby a number of non-overlapping treatments are used to destroy harmful bacteria.

The Z-2000 consists of a food-grade controller and lamp housing which are designed to meet IP67 and NEMA 4X standards. Constructed of stainless steel, the system is safe for use in washdown environments. The lamp housing easily bolts on to existing conveyors without interfering with food moving on the belt.

Pulsed Light is both effective at destroying microorganisms and safe for humans. In fact, Pulsed UV Light has been determined to be safe for the production, processing and handling of food by the FDA, Department of Health and Human Services (Code 21CFR179.41).

The company delivered its first Z-2000 system in April 2019 and is currently accepting orders. The Z-2000 will be available for viewing at the XENON Booth #157 during the IAFP 2019 Annual Meeting, which will be held at the Kentucky International Convention Center in Louisville, Kentucky from July 21-24.