What are the dirtiest, most contaminated objects in an airport? You might immediately picture the bathrooms or door handles, but you’d be wrong. The answer is the plastic bins at security checkpoints where we all place our phones and shoes.

Those bins typically carry more germs than anything else in the airport. They are hard to keep clean—and they touch the belongings of thousands of people, some of which are bound to carry viruses and bacteria. In other words, you could be picking up infections from everyone who used that bin before you.

Fortunately, since 2018, a company called Steribin has been working with XENON Corporation to use Pulsed Light technology against this health risk. Now the company has introduced a device that can be easily installed in airports to rapidly sterilize security bins, keeping everyone safer. 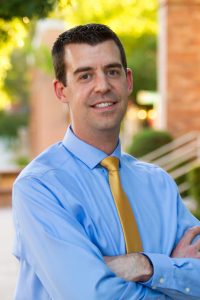 Recently, I spoke via email to Steribin CEO Jon Cole to find out more about how their invention works, and how it was created.

Q: You started the company well before the pandemic. Were you thinking of pandemics at the time, or just common flus and colds?

JON: “Yes, we started in 2018 after some studies had been published about how dirty those bins were. One study showed that the security bins are the most contaminated item in the airport and have 16 times the level of germs as the airport toilets. The COVID-19 pandemic has obviously brought more attention to it but even without a pandemic, our product is greatly needed in airports.”

Q: Why are security bins so dirty? Don’t airports clean them?

JON: “They try, but they haven’t had good options. Attempts have included antimicrobial stickers that go on the handles, replaceable bin liners, germicidal bins with chemicals embedded in the plastic, and manual cleaning, which is incredibly time-consuming. One of our sources said that during COVID-19, they planned to pull all the bins aside at night and clean them all manually. They said it was so time-consuming, that it often isn’t done. Even then, it’s a single time per day at best. Some airports have tested chemical misters that spray the bins with a sanitizing agent. We were told that after a couple weeks of use, the moisture had damaged and rusted parts the conveyor system.

“Our device works without any added time or labor, it doesn’t use any chemicals, and it can be done after each use.” 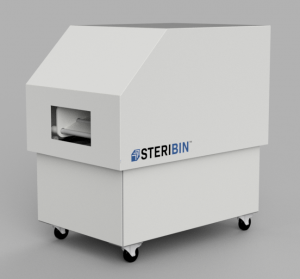 Q: Where does your product sit in a typical airport installation? How easy is it to install in an existing airport?

JON: “We are basically working on two main models. In smaller airports, the security bins are typically stacked on a cart at the end of the line (after you’ve collected your belongings). A TSA worker then rolls the cart of bins back to the beginning again. Our first model would sit in place of that cart. Once passengers remove their belongings, the bin would be placed in our device instead of on the cart. There should be no added time at this step.

“The second model is focused on large airports that have a conveyor system to return the bins automatically to the beginning of the security line. We refer to these configurations as ‘auto-return lines.’ Our device sits in-line with the conveyor, and bins pass through the device and are disinfected on their path back to the beginning of the line.

“As far as installation is concerned, we’re working to make it as easy as possible to install with existing equipment. We’re working with airports and TSA to make sure we fully understand their needs. The biggest factor will be electrical connections. Our device requires a 220v outlet, and the challenge with adding an electrical connection varies by airport.”

Q: How did you get from the idea to the product? Can you talk about why you chose to work with XENON, and what the process was like?”

JON: “When our inventors were focusing on ways to solve the problem, they knew Pulsed Light was a good option. It has been used for many years and has been proven effective and fast. Speed is a very critical component for our device because it has to work seamlessly in the security line without slowing down passengers. One of our inventors began researching sources in the United States and was impressed by XENON’s products. Our initial call with the XENON team included Lou Panico, CEO of XENON, and Lou’s name sounded very familiar to one of our inventors. After some discussion, they found they had met some years before when Lou had spoken at an event in New York City. XENON’s proven track record, along with the newfound relationship connection, helped solidify the opportunity to work together. XENON and its team have been extremely supportive throughout the entire process. They’ve been responsive to questions, have given feedback, and have supported our efforts in amazing ways.”

Q: Do you have any plans or ideas for extending the product or developing other products and applications, either for airports or other kinds of facilities?

JON: “As people have heard about our device, we’ve had many people contact us with ideas or inquiries on using it for their needs or applications. We know there are many possible uses for our device and expect to pursue those also. Our focus is primarily on airports right now as there are hundreds of millions of people who fly commercially each year. Nearly all passengers come in contact with these bins. If the bins have been shown to be the most contaminated item and the highest health risk at the airport, we feel very good about the impact our device will have on the world.”

In order to survive this pandemic, and others in the future, airlines must take every measure to ensure that their employees and passengers are safe from infection. Air travel is not just important for the health of airline companies, it’s also a critical part of our modern economies.

Thanks to innovators like Steribin, we can all feel a little safer as we navigate the months and years ahead.